Painters are used to dealing in colors but Ambroise Louis Garneray lived a more colorful life than most painters. To add even more color, he published various articles and books on his biography which were even more colorful than the reality. Meet the painter mentioned in Moby Dick and The War For All Oceans.

by +Lucas Dié on History

Ambroise Louis Garneray was born in 1783 in Paris. His father was painter at the court of King Louis XVI. In later years, Ambroise would change the writing of his family name to Garnerey to be distinguishable from his father and his two younger brothers and his sister who were all painters, too. 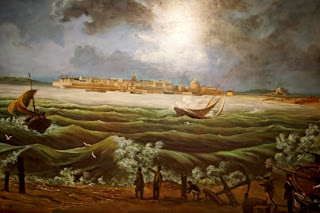 At the age of 13, he joined the French Navy and embarked for the Indian Ocean where he was stationed on the islands of Mauritius and Reunion. In 1799, he was part of the crew of the Preneuse as a helmsman and painter-on-board when the ship had to surrender to the British. The Preneuse was the last official French naval vessel in the area and had nowhere to run anymore. But Ambroise escaped capture by jumping board and swimming to land on Mauritius. 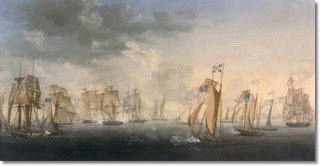 In absence of French navy ships, he joined Captain Surcouf on the corsair Confiance as an ensign. He was part of the crew when they took the Kent in 1800. He then invested his takings as a corsair in the slaving ship Union on which he also served as vice-captain. During the short peace brought on by the Treaty of Amiens in 1802, he served on various merchant ships before restarting his naval career when hostilities renewed in 1803. He was made a prisoner by the British in 1806 while on board the Belle Poule. 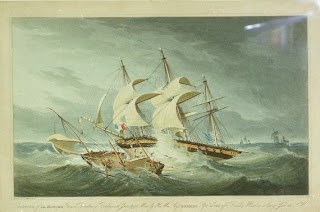 He spent the years from 1806 to 1814 as a prisoner in Plymouth on board of the Protée, the Couronne, and the Vengeance successively. He spent his time painting; mainly thanks to a constant demand for commissioned paintings by a British picture merchant.

After his release in 1814, he was unable to find work with the French merchant navy and returned to Paris to paint. He received his first major commission in 1815 by the returning Napoleon to paint the arrival of the L’Inconstant and the Zéphir coming from Elba. He didn't finish that painting until 1834 as the second restoration of the Bourbon dynasty intervened and a different kind of subject was called for. 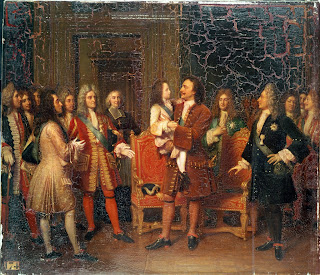 In 1817, he was made the official painter of the French Royal Navy by the Duke of Angouleme. He invented a new painting process called aquatint in 1830. In 1833, he was made director of the Museum of Rouen and started working with the porcelain manufacture of Sevres. His career went into a decline in the 1840s but was rekindled during the Second Empire. He was awarded the Légion d’Honneur and was received by Emperor Napoleon III. 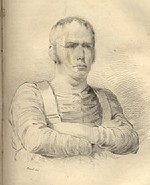 Apart of painting, he also did engravings of his own paintings and he published his autobiography in several parts and articles. His biography was too obviously on the inventive side of truth. It is often cited and named as a precursor to the maritime adventure novel. He died in 1857 in Paris. His name might ring a bell with readers of Moby Dick in which he is mentioned twice as a source of inspiration.